Sold as an out the box trail ready, all-rounder, full carbon bike. Does it live up to expectations? We hit the trails and put it to the test. 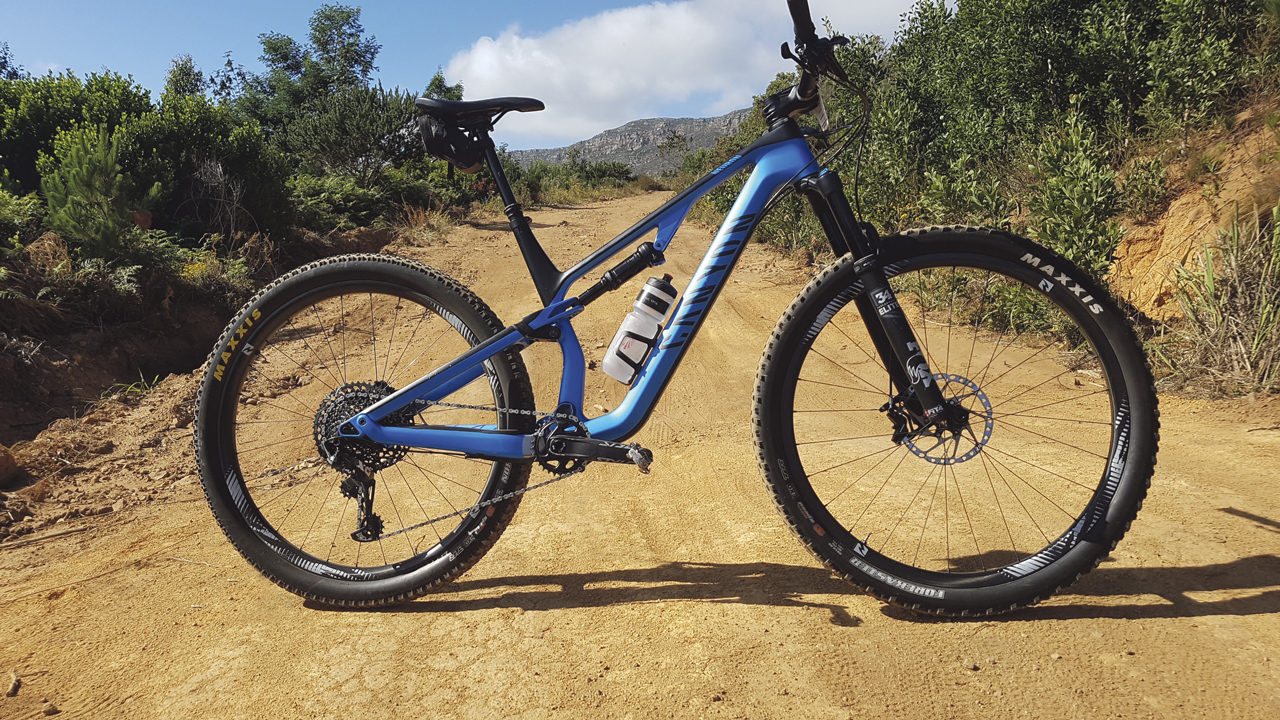 Canyon has been pretty visible on the global MTB scene – particularly with Mathieu Van der Poel flying the flag on the XCO scene. As a result most of us know the short travel, race bike the Lux. However the Neuron has been around for some time now and is coming into its own as a very competent trail bike.

The first thing you notice, as with most Canyon’s is the great paint job – they don’t have massive offerings
when it comes to colour spec, usually a muted option or something flash – Big Blue knocked it out the park
here. It looks damn fine. It’s a burly machine with angular and chunky carbon tubing – check out that chainstay! The Neuron is a full carbon bike and is the first generation of full carbon trail bike, previously only available in aluminium. The CF 9.0 we tested also comes out standard with Reynolds carbon hoops paired with fairly chunky 2.35 Maxxis Forekaster rubber – back and front. We had the Forekaster up front and the better rolling Ikon on the back for the test. As with all demo or test bikes the setup is important and probably has the most influence on your experience. To be fair to the bike we try and get it as close to the numbers to our usual ride but even this needs tweaking as the shocks, forks and geometry of the bike all influence the riding experience – we play a lot! With the help of the guys at Uitsig Bike Park I managed to get the suspension to where I wanted it. I had to play with the tyre pressure a bit until I found the sweet spot for getting to the top and then being able to take on pretty much any terrain on the descents.

Ok let’s wrap up the bike itself before we get to the ride. One of the big changes on the carbon fibre Neuron is the shock placement – vertical on the Alu models the CF has placed the shock horizontally under the top tube and brought in their “Triple Phase Suspension” system that it now shares with all of its carbon full sussers. This also allows a large volume bottle cage to comfortably fit into the frame. The linkage system is an interesting one that has a shock “yoke” that wraps around the seat stay and connects to the seat stay pivot – it really is a good looking system. The bike sports sealed bearing but also had seal covers that not only add additional protection to the bearings but smooth off the slick look of the bike really nicely. The Impact Protection System looks after your carbon tubing in a tumble or while travelling – keeping the levers safely away – the system has hollow screws that are meant to break off under a really heavy blow and it can be replaced. I especially liked the “bash plate” on the downtube – it not only protects the frame but it also doubles up as the cable channel – cabling appears to be internally routed and is really easy to get to, no cable chatter and superbly practical.

So onto the ride: The test bike came with a 30T front chainring on the standard Sram XO1 Eagle drivetrain (and shifters) which at this price point is great – the bike can only take a 32T as the largest ring upfront – but a 2x front derailleur can be fitted (really? I think we are was past this…) I really wanted a 32T for my style of riding but it really isn’t a game breaker at all. The brakes as tested were Avid Guide R’s and while adequate weren’t great, having to be bled during testing period and not giving a smooth response but a more on-off type braking experience. This is really where any negatives end. The bike feels superbly balanced and climbs really well. I didn’t have to play with the shock – left it in trail mode and it managed brilliantly – no bobbing, energy transfer was great with an “on the bike” feeling as you are planted pretty much directly over the BB. Sporting a 760mm aluminium handle bar with a 60mm stem – which nowdays is pretty average – the gravity boys will want a shorter stem and longer bar but this may not be the best for the geometry of this bike. These factors in my opinion don’t take away from the handling or fun factor of the bike. It’s 130 mm front and rear and it’s probably what most of us should be on – for most of us the travel is really forgiving on the gnarly stuff, while cornering and pointing downwards. It’s a trail bike and should be treated as such. I loved the balance of the bike, particularly when the dropper was down and

you automatically found yourself in an easy attack position. It really inspires confidence and you will find
yourself pushing your limits. The Fox 34 Performance Elite fork is standard with 9.0 and is a really good component – there isn’t much you can’t throw at it in the trail scenario, it really is excellent. Tyre pressure (or tyre selection) is key as it’s the only thing that may hold you back – get it right and you will find yourself having a ball!