Full Sus planning meetings are famed for heading South, so it wasn’t a difficult sell to get SHAYNE DOWLING to pack the family into the car and head to De Hoop Nature Reserve … 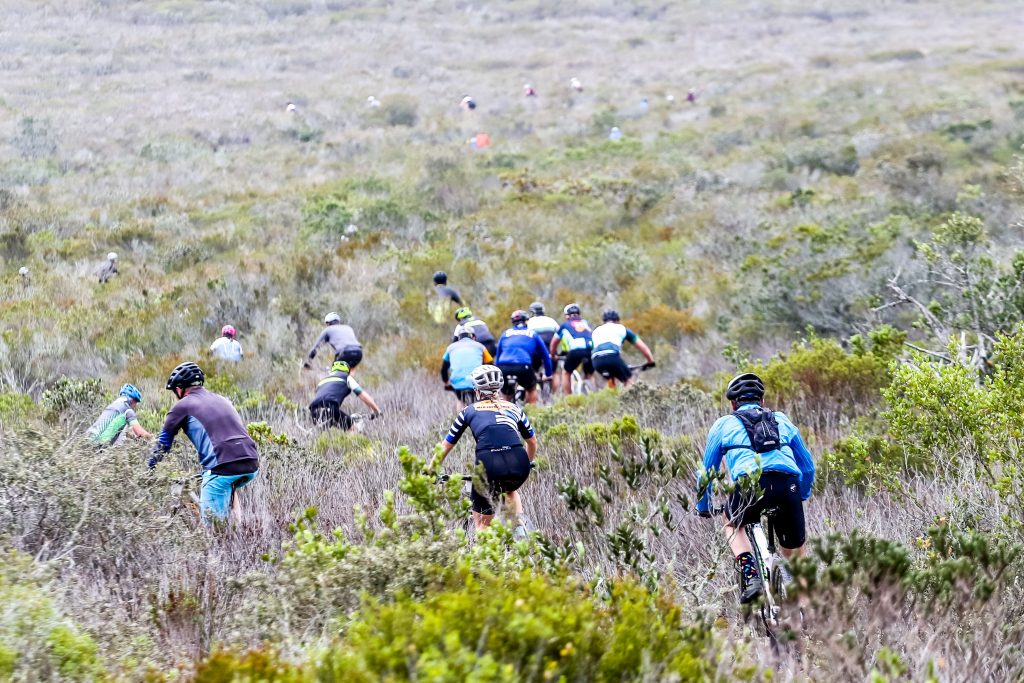 De Hoop Nature Reserve is a Cape Nature Conservancy that is in close proximity to Cape Agulhas, the most southerly point of the African continent. It is a beautiful hostile environment that has so much to offer from game viewing to what is considered one of the best land based whale viewing sites globally. It is certainly not somewhere you would normally consider going to ride your bike – well you would be missing out big time! Along with the De Hoop Collection, a lovely enclave of various cottages and accommodation options perched on the edge of a massive kloof looking down on the De Hoop Vlei and estuary. The organiser, Anneke Jacobs, supported by that mal chick, Suzie Hüsselman of blue hair fame, have put together a first class event on this remote tip of SA. Yes, there is a lot of jeep track connecting the fun bits, but they aren’t by any means free miles, and are remote and on some tough terrain. A great plus of the event is that there is no sand – it is hard packed, some indigenous grass sections that have been flattened on the ride line and aren’t too bad at all. For the rest it’s pretty much hard pack along with the jewel of the first day, the singles up (and down) Flat Rock. Johan Kriegler of W2W’s fame has worked his magic on the singletracks and they are fantastic. The ground is pretty much a local granite-like rock that is pretty smooth which creates a road-like feel with gnarly bits throughout the climb – it’s 4kms long but a really lekker climb!

The rest of the route is a constant 1-3° gradient besides the flat single track around the vlei – which sadly was completely dry due to the drought in the area – but still beautiful with massive cave structures looming over you as you leave the vlei area heading to the furthest point before turning around. The constant gradient is a leg tester but not unpleasantly so. Although it was a nice cool morning and we appreciated
the brisk and gusty wind at our backs when we turned for home things got nasty! The combined constant gradient along with the now howling head wind made for some testing riding. The constantly changing terrain from the stark bush and veld to the well-kept farmlands made up for the hurting legs, not to mention the local farmers who manned the water stations – serving lekker braaied boerie at the last table
with a good dose of geselligheid – and lots of advice for the pending mother climb of the day: Dennis the Menace. “It’s the last climb and then downhill all the way home.” How many times have you heard that? So Dennis is a hiking path that looks like it followed an old stream bed. It is hard packed rock with step-ups that have been filled with concrete by a most considerate trail builder – it is about 3km long and is steep. The challenge is to make it without stopping but most folk fail as its tough with some hectic rocky steps to navigate. I probably walked 30% of the path and it was a really brilliant piece of route – tough but so rewarding at the top with great views all around. Then we started to descend, meeting up with the route we followed out and getting back to the Windpomp where some serious decisions had to be made – left
onto the road and the easy route home or right and climb back up to the Flat Rock to hit the singles on
the down. No choice really, vasbyt bene and head right. And man, was it worth it. The track is gnarly, slate
type hard ground, slippery and fast! Don’t stop concentrating here, head up but not too far because the track snakes and the turns come up fast and are tight at speed. What a jol! It really made the haul through the wind and Dennis the Menace well worth it. Somehow after the joy of the singles the wind seemed to turn a little and gave you a “push” back to the finish line at the fabulous De Hoop Collection reception and restaurant area. 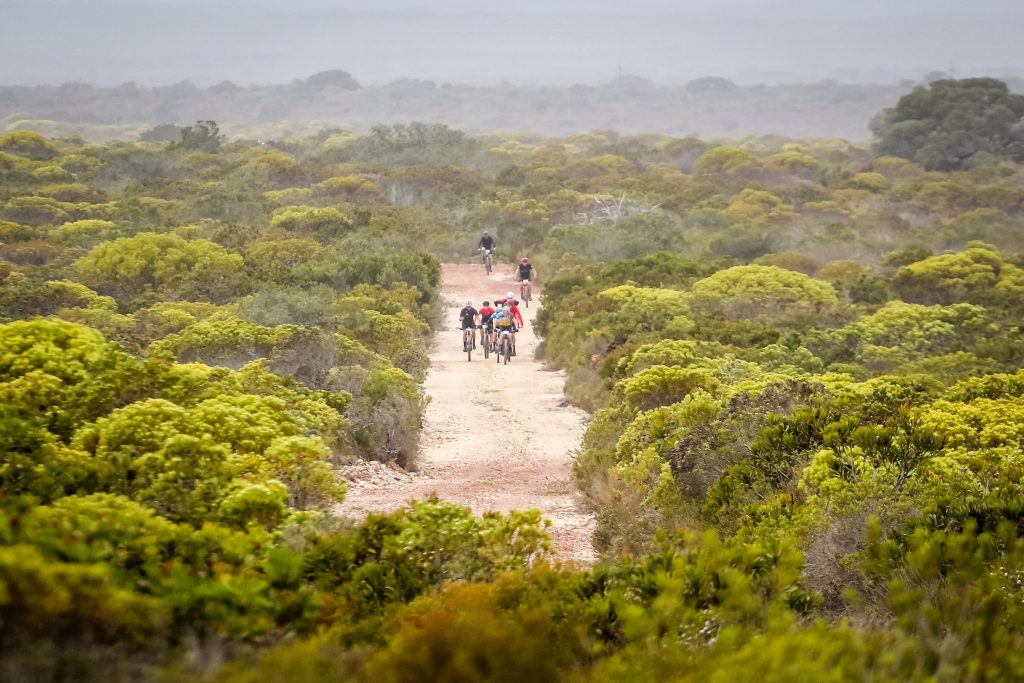 One thing you cannot arrange is the weather and I’m starting to think I may be a drought breaker as the wind started to get steadily stronger after Day 1 and was howling proper by the time Thor decided it was time to show off. The early morning served up a huge light show, massive claps of thunder, the
heavens opened and man, did it rain. Despite a move to a later 9am start the organisers wisely made the call to cancel Day 2. Sad as it was to miss the whale spotting coastal trails, the lightning, wind and heavy rain just never made it an option. Their decision was vindicated when just after 10am the roads entering
the reserve became impassable due to flash flooding of local rivers, some of which hadn’t flowed in 15 years. It was a real adventure. So there we were huddled in the reception and restaurant, some of the guys enjoying the World Cup game, steaming cups of coffee and rusks and waiting for the rivers to subside. Three hours later we were able to get across and head for home. The De Hoop really did prove to be an adventure and a mountain bike ride that I now have unfinished business with. The event takes place in the school holidays and offers a great, safe family getaway – there is no cell phone signal, so no screen time! Lots of things to do for the kids though – cycle, tennis, walks and animal and whale spotting. The total package! I highly recommend the De Hoop Vlei MTB Experience. Plan your holiday and road trip around it – I’ll definitely be back! 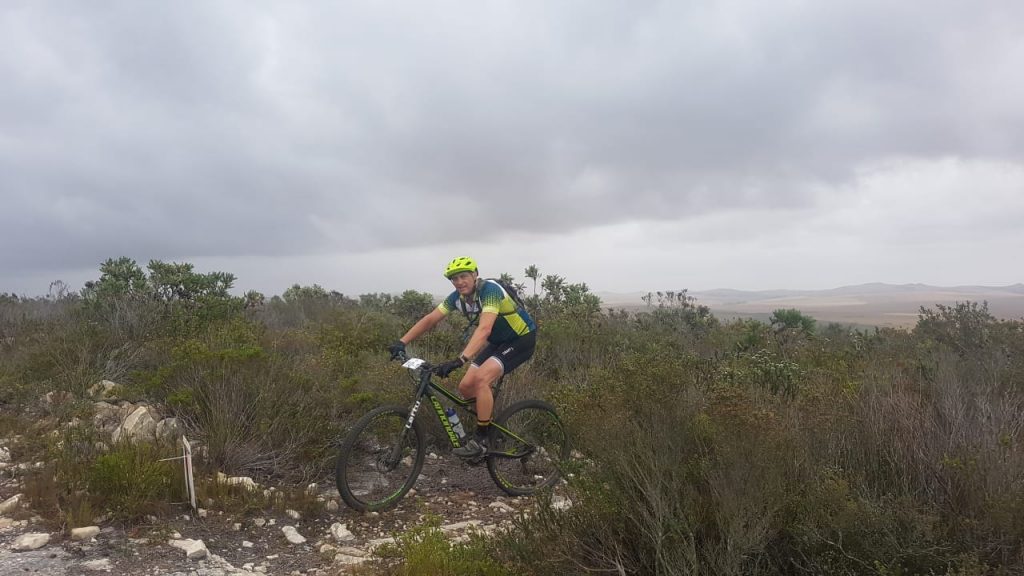