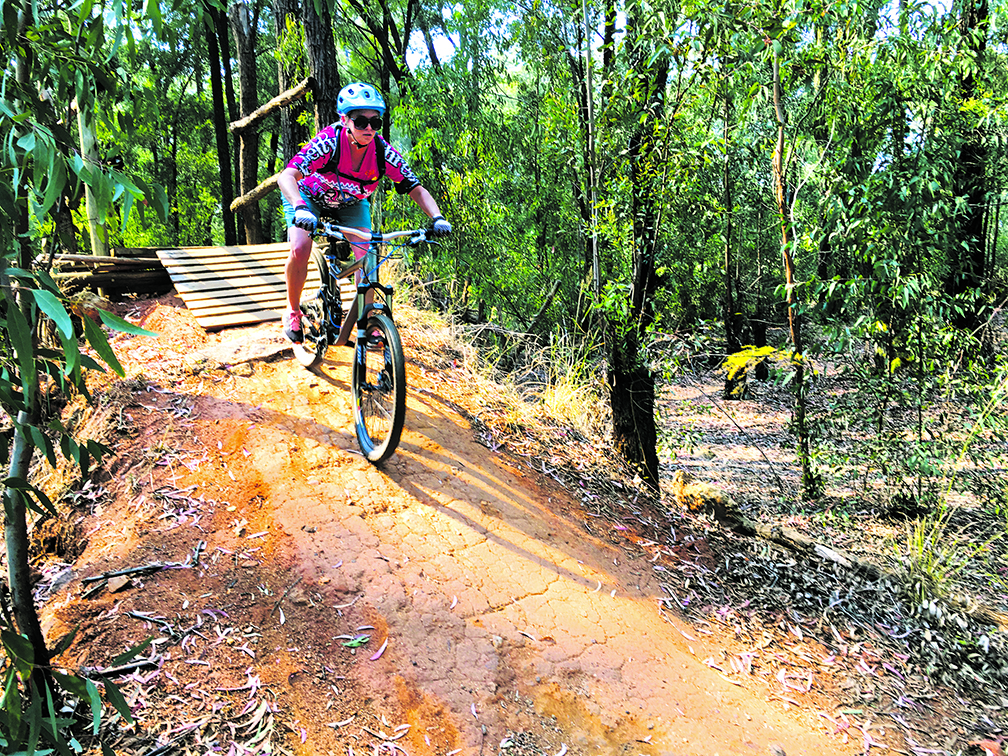 As usual on a beautiful Saturday, I’m always slightly hung over, but this time I was super amped ’cause I’ve
always heard such amazing things about The Big Red Barn in Olifantsfontein, and man was I seriously impressed! As I got there I was greeted by Greg, and he explained the amazing various trails to me and he said: “There is the one section that will confuse you, but just stick to the 2A and the eventually you’ll get 2B” … I thought kiff, it doesn’t sound too bad! As we started there was such a beautiful chilled beginning in a
forest like vibe, and it was hot so the tree tops made it even more bearable with my hangover …

Eventually my chilled riding became hectic, especially getting to ‘WTF Interchange’ there were so many sign
boards … but it seriously gave me a giggle! The way they have named some of these trails really made it more adventurous for me, like the one ‘Back To The Moon’ whahaha, I’m sure we have all had that experience THAT ONE TIME … anyways, what was so great for me was seeing so many riders constantly at any given time at any given trail, this really made my day to see the sport where it is.

So, I literally had to have like a 15-minute breather, it was so crap hot and my hangover was starting to fade
but the sweat started pouring out of me more than usual, so I did what any normal rider would do, take off my riding jersey … yes, to me evening riding in a sports bra is classy AF! Shame even some riders asked if I was OK!

After that nice breather, we carried on the 17km trail, which we probably only had 9km to go, but it was such an absolutely amazing ride that I had loads more energy, so when I eventually saw the ‘Viper Pit’ and then the other option being ‘Bangbroek Pad’ … And there was no chance I was going to take the scaredy-cat route, so I chose the Viper Pit … What an amazing berm, it really was almost my highlight. Then eventually we got lost again, and ended up going from route two to route one, only to find out route one is actually a 36km trail …

Eventually we got back to THE BIG RED BARN and I swear I could sit there for hours watching people. They have literally everything; got the WHOLE family, I saw there were nice running trails, seriously loads of MTB routes, they even have acrobranching, a massive zip line, a huge trampoline, and cycling gokarts for parents and kids, like this is a family fun place.

I ordered my wood oven pizza with my whiskey and soda and managed to chat a bit to Greg again, he said that on an average weekday there are about 300 riders and about 700 riders per day on a weekend, how crazy! Some seriously fit ous out there, but the best part that I liked was that you can even rent a bike, they have bikes for kids, teens and adults and they have Giant, Specialized and Commensal bikes. Rates: R220/bike for 3hrs, helmet included (R800 deposit – mandatory), Kids range: Kids bikes for all ages prices from: R100 up to R150/ bike, helmet included (R200 deposit). They also have some lekker deals like for annual tickets: (unlimited rides for a year): R1025/adult | R625/under 12, then they also have multiple ticket
discounts: 10 tickets are R450/p or 20 tickets: R800/p, and then for like a every now and then rider it costs R50/ride/ for adults, children under 12 are R30/ride and then for the pensioners/students its R40, which is seriously not badly priced for the amount of fun you can actually have.

If you’re going there for a ride, let me know what’s your thoughts, I’m definitely keen to give it a go again, and not hung over.