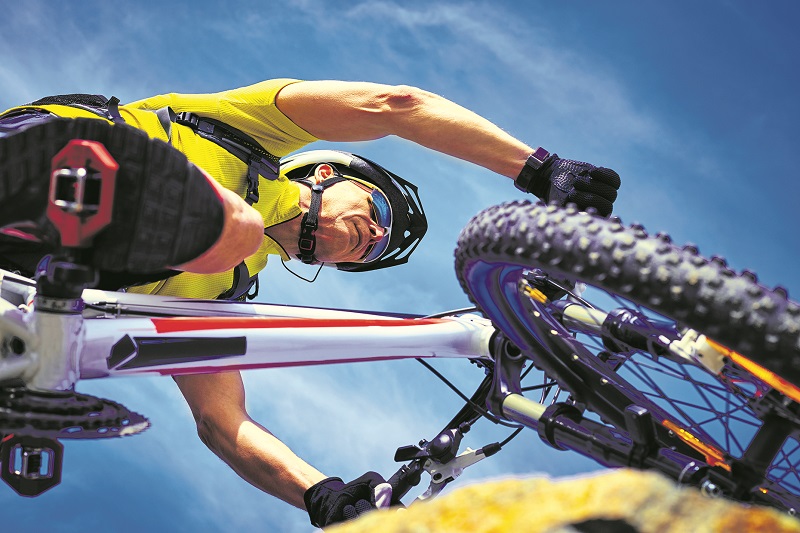 The purpose of all the hours we spend training is to improve our performance. Depending on your current level of fitness and experience, improvements could mean finishing in the middle of the pack rather than at the back, winning your age category or stepping on to the top step of the podium at the elite level. Whatever performance means for you, if you put the time in to your training, you want to see results. Understanding the demands of the event will help with formulating realistic goals and designing a structured training programme. Once you know what the event requires, you can design a programme which aims to improve the specific characteristics which have been identified to be crucial for success.

Olympic Cross-Country (XCO) events are physically demanding and tax both the oxidative and glycolytic energy systems. XCO events are generally more intense than their Cross-Country Marathon (XCM) counterparts and success in this discipline requires the ability to sustain highintensities (>90% of maximum heart rate) for between one to two hours. XCO is characterised by large variations in power output caused by steep climbs, technical singletrack descents and open jeeptrack sections. Glycolytic capacity and high power-to-weight ratios have repeatedly been shown to be important determinants of XCO race performance. Glycolytic capacity is improved by exercising at intensities
above your functional or ‘lactate’ threshold and high-intensity interval training (HIT) is the most effective way to improve your glycolytic capacity.

Cross Country Marathons (XCM) races are generally longer than XCO races, with course profiles consisting of numerous technical climbs and descents. XCM races have fewer large fluctuations in power output, but are still completed at a relatively high intensity (>80 % of maximum heart rate) which means that XCM racing also requires a well-developed oxidative and glycolytic energy system. However, the oxidative energy production has a bigger role to play in XCM racing when compared to XCO events. This often leads to the common misconception that performance in XCM will not benefit from the inclusion of high-intensity interval training (HIT). However, the ability to perform highintensity efforts could mean the difference between breaking away on the final climb to take the win or making it home to avoid the cut-off in a stage of the Epic. In general, multi-stage racing will have the same physiological requirements as those of XCM. The only real difference is that you will be required to wake up the next day and do it all again so day-to-day recovery between stages is important for stage races, especially during the longer versions (Cape Epic and Joburg2C).

The gravity assisted disciplines of downhill (DH) and Enduro racing require riders to have high levels of technical ability, explosive power to accelerate out of corners and on flat sections, and probably one or two loose screws. DH includes periods of high cadence (>130 RPM), with the highest values usually recorded at the start as the riders leave the start gate. Similarly, peak power outputs during a DH run are observed in the first 5 – 10 seconds of the run as the riders attempt to reach maximum speed as quickly as possible. DH and Enduro are unique in that the riders are required to generate power outputs suddenly and the events are characterised by a combination of acceleration and deceleration efforts. Riding dynamics, such as line selection and ‘flow’, have in fact been suggested as important determinants of DH performance. DH also requires isometric and dynamic muscular efforts in order to cope with technical sections and absorb the vibrations experienced while riding over uneven terrain.

Success in all forms of mountain bike (MTB) racing is also highly dependent on a rider’s skill level, with highly skilled riders tending to lose less speed as they pass through technical sections such as rock gardens. Differences in the level of technical ability and tolerance for risk have been suggested to be the reason for the variation in lap times in both XCO and DH riders. Although this seems logical, mountain bikers may unintentionally neglect skill training as part of their programmes so keep an eye out for skills clinics in your area to assist in improving your technical abilities.A well-structured training programme consists of different periods or phases which target specific areas of performance. A programme should begin with very general conditioning sessions aimed at improving general fitness. The volume of training (time spent on the bike) should reach a maximum early on in the programme and slowly decrease as the intensity of the sessions increases. Do not make the fatal error of trying to include high volume and high intensity in the same session. In addition, the closer you get to the event, the more specific the training sessions should become to that event. It is often a good idea to include other races as part of the training programme to help sharpen up your fitness and skills. No matteryour current performance level, or the time you have available to train, intelligent training can result in noticeable gains. Beginners should look at focussingon the areas which will result in the biggest gains while more advanced or experienced riders should focus on refining their training.

Monitoring training is a great way to keep track of what you have been doing, and identify what has worked for you and what hasn’t. There are numerous methods to quantify intensity, with the Rating of Perceived Exertion (RPE) being the most simple and affordable. Intensity is rated on a scale of 0 (Rest) to 10 (Maximal effort). Alternatively, heart rate has been used to monitor training intensity since the ‘80s and
the affordable nature of heart rate monitors has made them common training tools. It is recommended that you perform a maximal incremental exercise test at a recognised sports testing institute to help determine your personal training zones. Training according to specific training zones, which are based on your metabolic thresholds, will improve both the specificity and quality of your training. The most direct measure of cycling intensity, however, is power output. It is not influenced by external factors and cycling is one of only a handful of sports where power output can be measured during both training and racing. Power meters have become increasingly more affordable and, as a result, so their popularity has increased among cyclists of all levels. Using a power meter during training and racing is a great way to monitor not only intensity, but also progression. However, as with any other measure, it is the interpretation of the data which is more important.

In summary, different disciplines within mountain biking all have unique requirements for success and training programmes should target improvements in these unique areas. Training programmes should progress from general conditioning to more specific, high-intensity sessions. Monitoring intensity during training is important for adaptation and heart rate and power are the best measures for monitoring training intensity.

Benoit Capostagno currently works for Science to Sport in Cape Town. He is currently completing his PhD at the University of Cape Town and is investigating training adaption and fatigue in cyclists. For more info log onto www.sciencetosport.com