The gates of hell were open and Alastair Sellick was ride-walk-riding his way past, was the end in sight? Was Al going to make it? We pick up his battle to finish Atta 2022 – The Hades Edition.

At some point, I saw some shade and decided to sit and wait for longer than usual. This had become a war of attrition. A battle for survival. In my second Attakwas, done in the mud in 2018, I was way under-cooked, as I hadn’t been doing it as part of an Epic training block. Back then, I had naively thought that mud was as bad as it gets, but after this experience, give me mud any day of the week! At this rate, in this hot edition, I was staring a 9hr+ time in the face. Would I even finish? Thoughts like this are not pleasant, but after about 10 mins or so of R&R in the shade, I was joined by another sufferer. After a bit of morale boosting banter, I plucked up the resolve to continue. 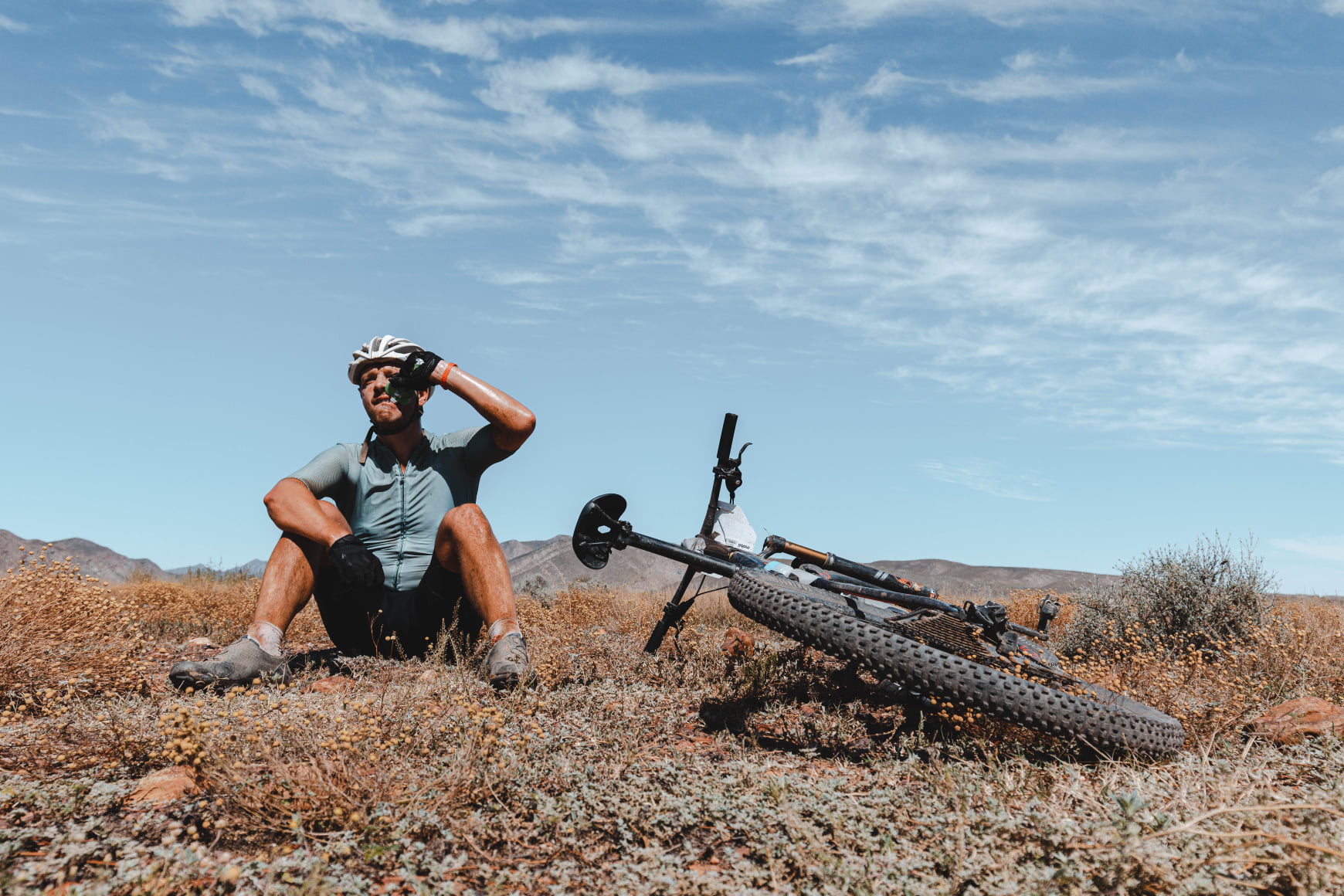 One of the attractions of Attakwas is that, apart from the challenges it presents physically and mentally, one traverses 4 different biomes, starting in the semi-arid Klein Karoo semi-desert, then moving into the fynbos of the Attakwas Gorge, followed by the forest meanderings, and then finally entering the riverine / coastal sections at the end. As I counted down the last few kms to WP4, a new challenge started to present – cramp. I had been following my usual pre-marathon preparations of sulphate loading, courtesy of the tried and tested USN anti-cramp tablets. However, in the heat, everything changes. At some point, I pointed my feet to remount my bike, and all of a sudden the searing pain of cramping right calf muscles shot through my system. I had set the scene for the next 3 or so hours of suffering and border-line on/off cramping that would test my resolve to the very limit. I started questioning my life choices, and why was I doing this race again? WTAF, to be blunt?! The thermometer continued to crank ever higher, and the only punctuation to the heat was an occasional light breeze, and every now and then, I managed to generate enough air movement from my own forward motion to actually cool down a little bit.

WP4 finally presented itself, Now, armed with iced water in the front bottle and iced coke in the rear water bottle, I started to believe I could make it. In Attakwas, there are two nasty drops down to the river, always followed by a climb back to the top of the hilly ridge. The drop part is fine, it’s regaining your altitude that proves problematic, especially of you can’t ride uphill anymore. In the back of my mind was a lingering memory of another problem – a long never-ending grinding uphill gravel road, and I couldn’t for the life of me remember whether or not it was before or after the river drops. As fate would have it, it was after the first drop, but before WP5. What really killed my dwindling morale was that it seemed to go on for ever and ever, and when your walking speed falls to 4 or 5 km/h and you still have about 3 or 4km to go to get to the waterpoint it is very unpleasant. However, onwards I plodded. The only consolation I could find was that many of the riders who still rode past me were going so slowly that I wasn’t really losing that much in terms of relative placing or time, not that I cared about where I was going to place anymore… Finally the Eternal Hill of Loathing and Despair ended, and WP5 presented itself. The cooling breeze from the coast was a bit stronger now, and thankfully, there were anti-cramp pills on offer from the amazing waterpoint crew. Then two of our crew of seven from B-batch arrived just as I was about to leave. “Let’s finish together”, Crew Man A said. “Sounds great!” I said. Although these would prove famous last words. The boost of riding with one’s mates, and it being a bit cooler, meant that, against all odds, I could actually ride uphill again (something I’m usually quite good at). So that hill passed quite quickly, and then it was onwards to the finish.

However, white line fever suddenly struck and Crew Man A and B suddenly just gapped it. I was powerless to follow them. So much for finishing together! I focused on keeping my heart rate around 145bpm, when suddenly a train of about 5 guys zoomed past. Summonsing up every last inch of my resolve, I did what I had to do to join the back of the train. One of them was spat out the back, but I clung on, until with about 2km to go, I lost them. By this stage, we could see the incoming cold front, and feel it. Subtract 10 degrees from the ridiculous temperatures, and life started to seem better. Add to this the fact that the road had changed from 1-2 degrees uphill to 1-2 degrees downhill. The ordeal had to be nearly over, and so we hit the last steep decline. I crossed the line, gratefully accepted my medal, placed my bike against the railing, and found a comfortable, piece of grass to collapse on.
The 2022 Attakwas certainly ranks as the toughest mountain biking experience I have ever endured – tougher even than Day 1 of the 2017 Cape Epic that saw 84 teams withdraw in 40 degree+ heat. It was an ordeal that will live with me for a long time – apparently only 320 odd riders finished, out of a field of 1,000. Fact Check Dot Com that if you will, but it feels about right, Four out of our crew of seven made it, and that shiny Atta medal will join the collection knowing that it was forged and earned in the fiery Hell of the South back in 2022. I’ll never, ever do that race again. But oh, look, it’s Attakwas! 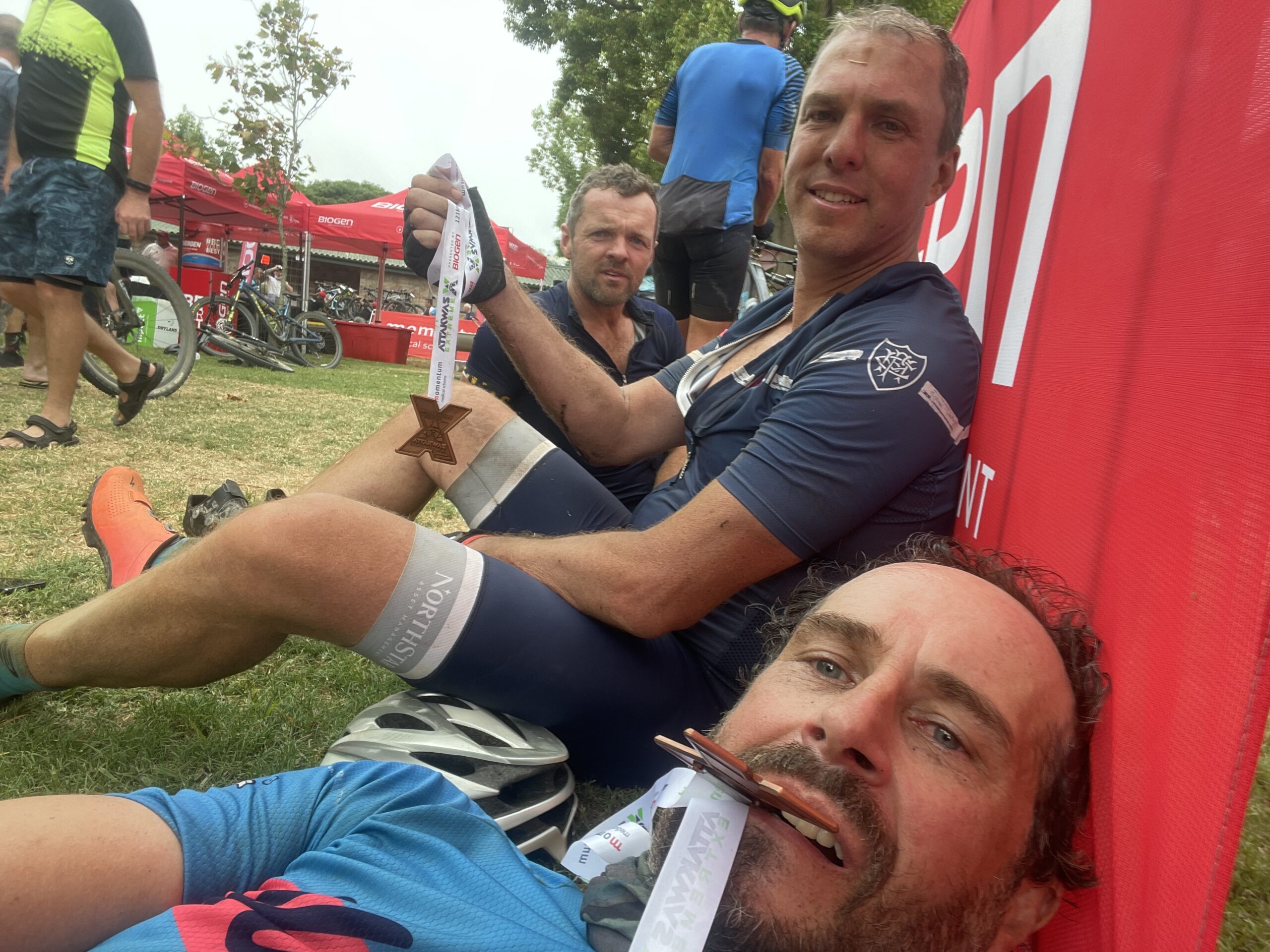 See you at next year’s event…