Trek has re-launched a number of their rider-favourite platforms for 2020, and the new Top Fuel is arguably the most relevant for South African buyers. 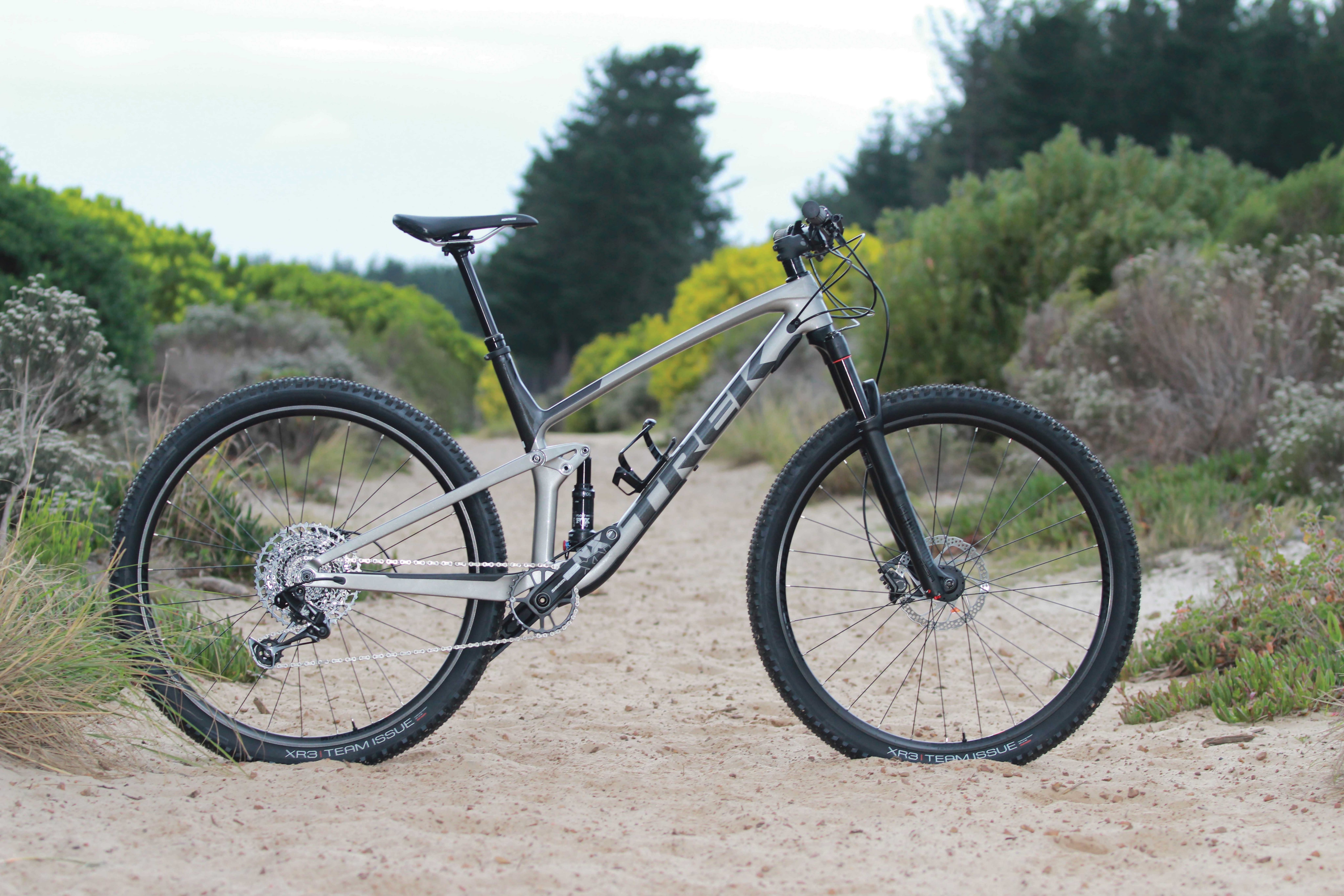 Our racing profile is odd, on the southernmost tip of Africa. Enduro is tiny (but growing), XCO is tiny (but also growing, a little), downhill will always be a mad niche and trail riding is something we do on whatever bike we have. Mostly, that is something designed around the most popular form of riding and racing; what the rest of the world calls marathon. We know it as getting out on our bike and enjoying the vast expanses of nature we are so spoiled with.

Starting out, our most-bought bikes fast became slightly longer-travel XCO bikes, steep and twitchy, as light as the budget allowed (often at the expense of both comfort and durability) and ready to race. All-day epics are not so much fun on these, though, as tight geometries demand levels of concentration that are just not available when you are broken. The previous generation Top Fuel tried, a little, to climb out of this compromise pit, and almost did. The new one? Well, let’s see.

The longer, slacker geometry is noticeable, before you even swing a leg over the Top Fuel. The head angle has been steepened to 67.5/68 degrees, depending on the position of the Mino Link flip-chip, and the seat tube angle is a roadie-esque 75 degrees, with a generous 470/475.2mm reach on our large test bike. The Mino Link is one of the easiest we have played with, to date, located on the front rocker link/upper shock mounting bolt. We loved the more relaxed low position, where the shorter reach and slacker head tube angle makes for a trail-ride experience. Pure racing snakes will love the sharper handling of the high setting, but you must play with both and see what suits your riding best. 120mm of front travel, and 115mm out back, pushes this former XCdesignated bike firmly into marathon/fun/trail territory.

The most noticeable difference from the last Top Fuel is the upside-down rear shock, which attaches to the main frame through a rigid-as-hell fixed lower mount (this helps with cable routing, too). The repositioning of the main pivot forwards of the bottom bracket claims to improve pedalling stiffness and reduce squat – we can’t disagree, in our limited time with the bike we were having too much fun to notice disturbing levels of pedal-bob.

Our 9.7 test machine was rigged with a 120mm RockShox Reba up front, with Motion Control damping and the firm’s finicky twist-grip-controlled lockout doing double-duty on it and the Fox Performance Float on the rear, mounted upside down to make the routing of the remote cable easier, and help squish all the moving bits in as compact as possible.

We expected the new version to have a compromised feel on the climbs, with more travel and a less racy focus. Nope. The steep seat angle and slammed stem push your weight forward, for an aggressive uphill stance, and the added stiffness is welcome, especially in the low setting. On ‘high’, it rides like a slightly restrained XCO racer, and if your goal is to KOM everything with a positive gradient, you will probably prefer that setup.

For most riders, low is the place to be, ready to rock the rest of your ride, too. Pedal bob, as we mentioned earlier, is hardly a factor, and the take-away feeling is one of getting to the top of the climbs rather quicker than you thought you had, fussfree. The fat takkies help too, making steep stuff that begs regular XCO bikes and tyres to stop being silly a whole lot more manageable; more grip, more cush, more control. All in, the 9.7 weighs in at 12.6kg, which is a tad porky as a race-winner, but quite light for a fat-tyred, dropperposted all-rounder.

This is where we wanted to play with the new version of the Top Fuel. The old one was a terrific race rig – sharp and twitchy, with just enough travel and a ride-on-rails feel on tracks you knew well. Take it out of its comfort zone, and caution was always in the back of your mind, as it is with any XCO bike. The less aggressive new Top Fuel has pieced out measurably, and will appeal to trail-riding mountain bikers who love it rough, ready and unexpected on trails old and new. And who love it long – you certainly don’t get
nearly as beaten up on longer rides as on the older version.

We didn’t play too much with shock pressures, sticking to the manual-driven weight/pressure guides, and the general feeling is that we probably didn’t need to. Add in the chunky 2.3-inch rubber, on wide 30mm rims, and 180mm stoppers, and you are heading into proper fun territory, rather than scrabbling for grip and life on racing rubber, yet the total package remains race-fast for most.

Bontrager, Trek’s components arm, provides most of the non-SRAM stuff, starting with the Kovee Comp 23 wheels, with Boost 110/148 providing yet more stiffness to an already racy setup. Gearing is sensible; NX Eagle 32-tooth up front and a wide-range 12-speed 11-50 at the back ensuring your knees might outlast
your ambition on the climbs, while Bontrager XR3 Team Issue 2.4” tyres and 180mm rotors keep you grounded on the way back down, as does the 150mm internally-routed dropper post, remote lever mounted to alloy 15mm rise bars.

The new Top Fuel is unlikely to be raced at the highest level (like the old one was), for that the factory-level riders can call on the firm’s as-yet unreleased shorttravel machine that may, or may not be called the Supercaliber. Really, we can’t tell you, but there are enough spyshots on the interwebs for there not to be a race-snake XCO bike in the pipeline. That takes the pressure of the Top Fuel. It can settle into what it does
best; a little bit of everything, fast.