Wind, wind and some more wind was the order of the day for my ride from Upington to Onseepkans in the Northern Cape. We spent the previous night at Red Sands lodge about two hours’ drive from Upington. We arrived a bit late to order food or make something to eat but luckily the kitchen helped us out with a toasted cheese sandwich. Definitely not the best dinner before a big day out but a toasted cheese partnered with a sneaky beer was the only option we had. Luckily, we had the option of having breakfast the morning of the big planned adventure and this saved the day. We set off towards Upington just before 8:00 to arrive at my start destination just before 10:00. I did not want to start too early; The Northern Cape is a bit cold in the mornings and I was not in the mood for that. 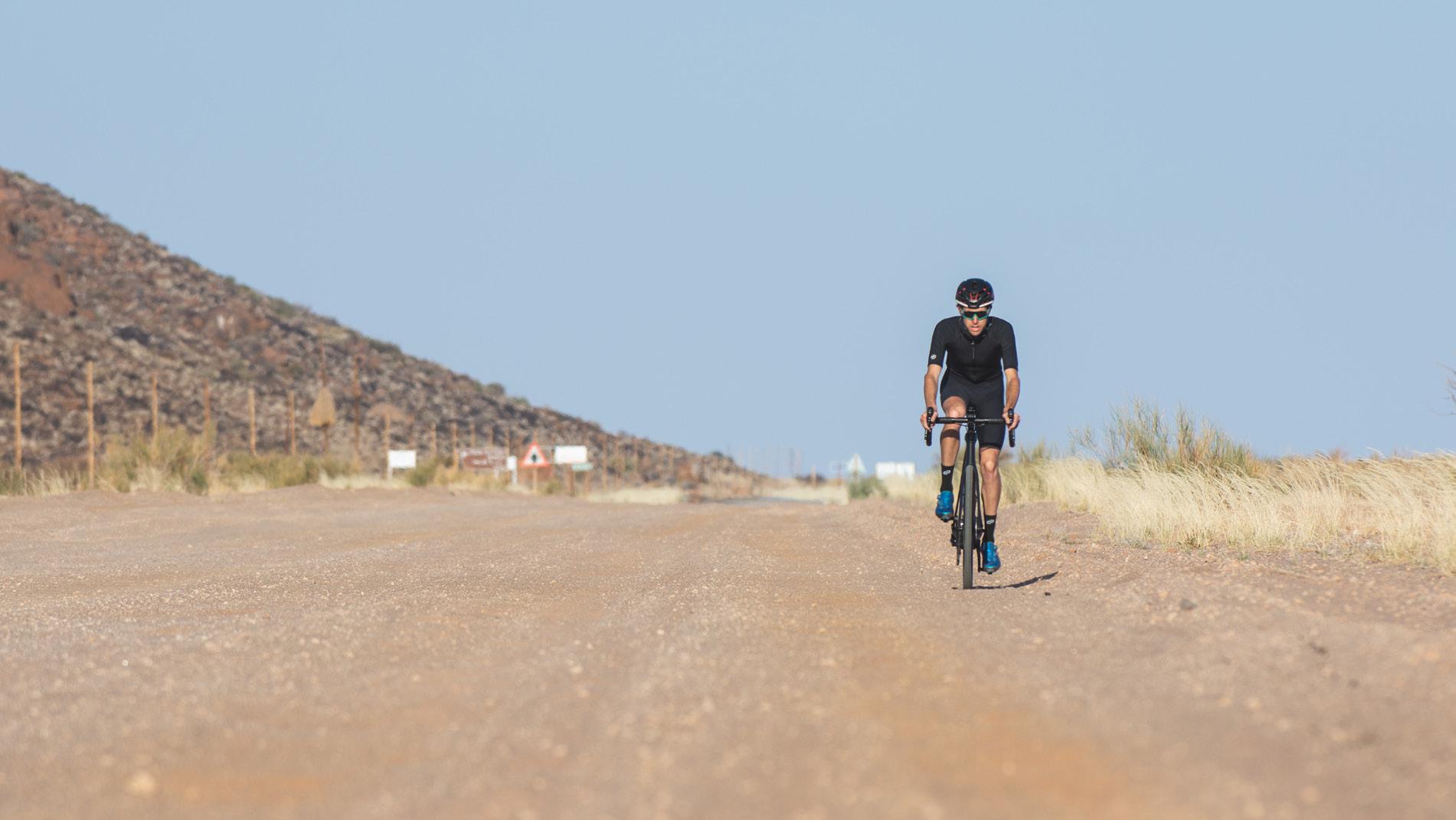 We arrived just before 10:00 at a filling station just outside of Upington. Whilst Michaele was filling up the bakkie I quickly took the bike off the rack and got myself ready for the adventure. The wind was already super strong at the start of the ride and I was a bit nervous. I tried to get ready as quickly as possible, to make sure I could not change my mind. The first 5 km rolling through Upington was weird. I could not imagine myself being or ending in Onseepkans at the end of the day. The first 40 km went by very quickly, I arrived in the first town on my route, Keimoes, in just over an hour. My average speed for the first 40 km was just under the 40km/h mark and I was definitely in good spirits, and thought the ride was going to go be very fast. My dreams quickly got crushed as the road made a turn for the worst or should I say right. Head wind, side wind but no tail wind from this point forward. The next 40 km towards Kakamas was no joke, my average speed dropped from 37 to 30km/h. This was one of my toughest parts of the day, in the and not even a buddy to support me out there. Arriving in Kakamas at the 85 km mark I was super happy and excited to see some form of shop or civilization. This point on the route was my first and only place to stop for water and some snacks. From this point forward towards Onseepkans there was literally nothing but open roads, sun, and wind. Leaving Kakamas I was stocked up with snacks and water but to be honest was a bit scared of the task that lurked in front of me. The N14 towards the Onseepkans turnoff was long, empty, and super straight.

The wind was luckily from the side and not from the front, not ideal but not all that bad. At about the 110 km mark 20 km outside of Kakamas I suddenly heard a loud noise and the noise no cyclist wants to hear. Sealant everywhere and my back tyre losing air fast. Not what I wanted but instead of getting too sad about it I had to make a plan fast as I only had a CO2 canister with me (bad planning I know). I used a small plug and thought YES, that was not too bad and started rolling on, but not even 10 m from there the plug shot out and I was back to square one. This time with almost no air left in my CO2 canister I used a large plug, and my last bit of air and a lot of hope. It worked and I just hoped that it would stay that way. The next 60 km was not easy, I did not even take my phone to take a photo or video. I could not get myself to take my phone out. I was tired, miserable, and over the awfully long open road. There was nothing and no one for a long time and trust me that was not easy. At one point I just stopped on the side of the road and stood there, during this time I asked myself: “Why would you do this? Why did you think this was a good idea?” After my sense of humour failure, I ate some sweets and set off again, feeling a bit better. The next goal
was the turnoff towards Onseepkans. The road was so flat I could see the turn about 15 km away, but it just did not want to get closer. I knew if I arrived at this point it was about 50 km to Onseepkaans including
about 30 km of gravel road. I also knew that Michaele and Jarrod would make their way towards me to take some photos and just offer some encouragement to reach my end destination. 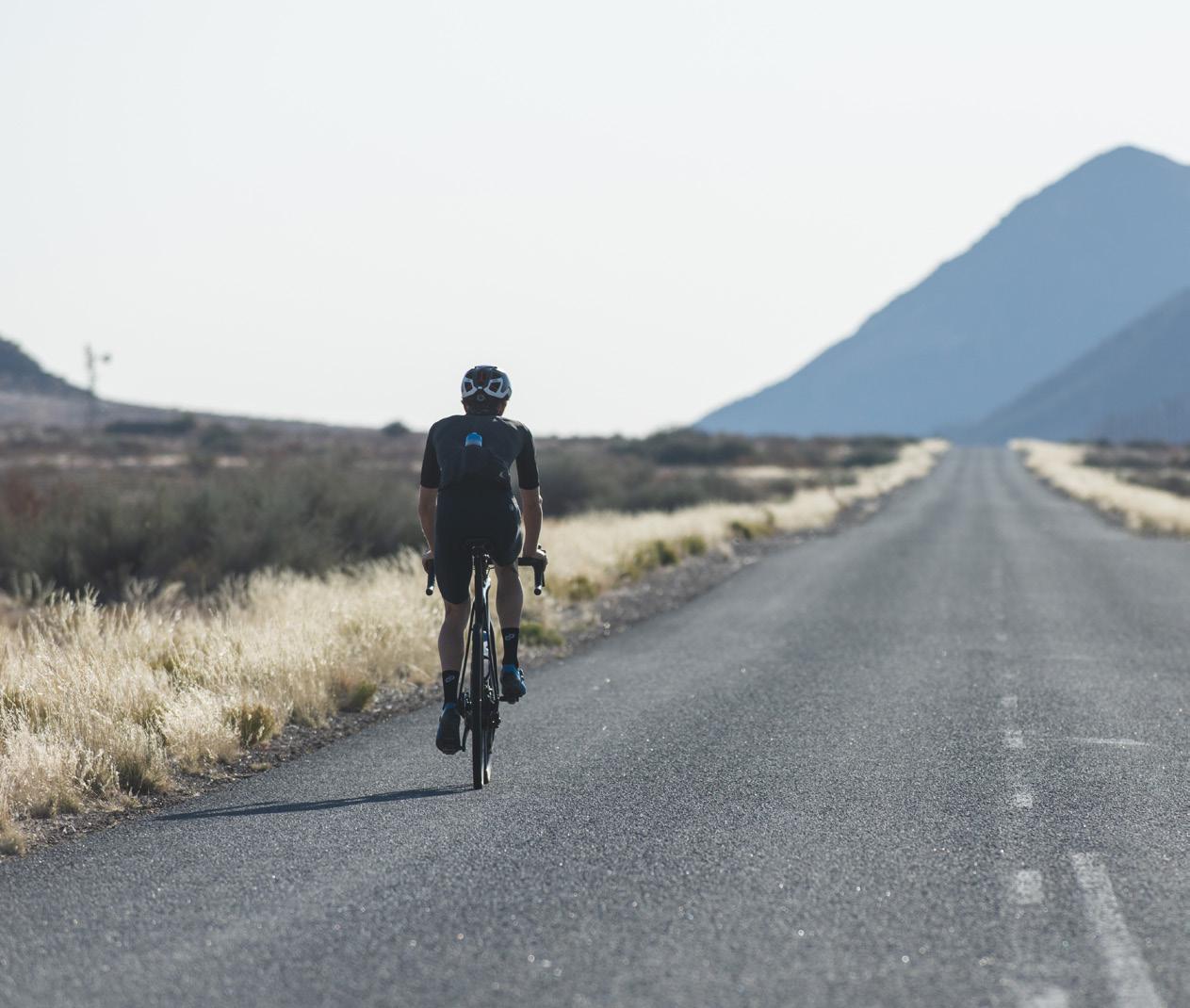 Finally, I arrived at the turn, with no more water and very broken. Michaele luckily left some water for me hidden under a bush, saving my life! I let them know that I was on my way towards the gravel road. I knew they would leave the farm and head out towards me for the photos etc. I started feeling better and set myself a goal: to cover the last 50 km in under two hours, into a headwind and on a not so nice gravel road. Finally I saw Michaele and Jarrod on the horizon, I was super excited to just see people and actually talk to someone else other than myself. Jarrod worked his magic with the camera and took some amazing shots; they even brought me a Devil’s Peak Hero. Hitting the gravel road, I realized that I was in for a long ride over the last 30 km as the road was in unbelievably bad condition but I did not have any other options to get to Onseepkans. This was also a great opportunity to test the Trek Domane SLR; to this point the bike was amazing and did not miss a beat on the entire day except for the one flat tyre. I put 35c Bontrager gravel tyres on and this made the gravel road that much easier and better. I settled into a nice rhythm over the last 15 km and was incredibly happy when I reached or could at least see Onseepkans in the distance. 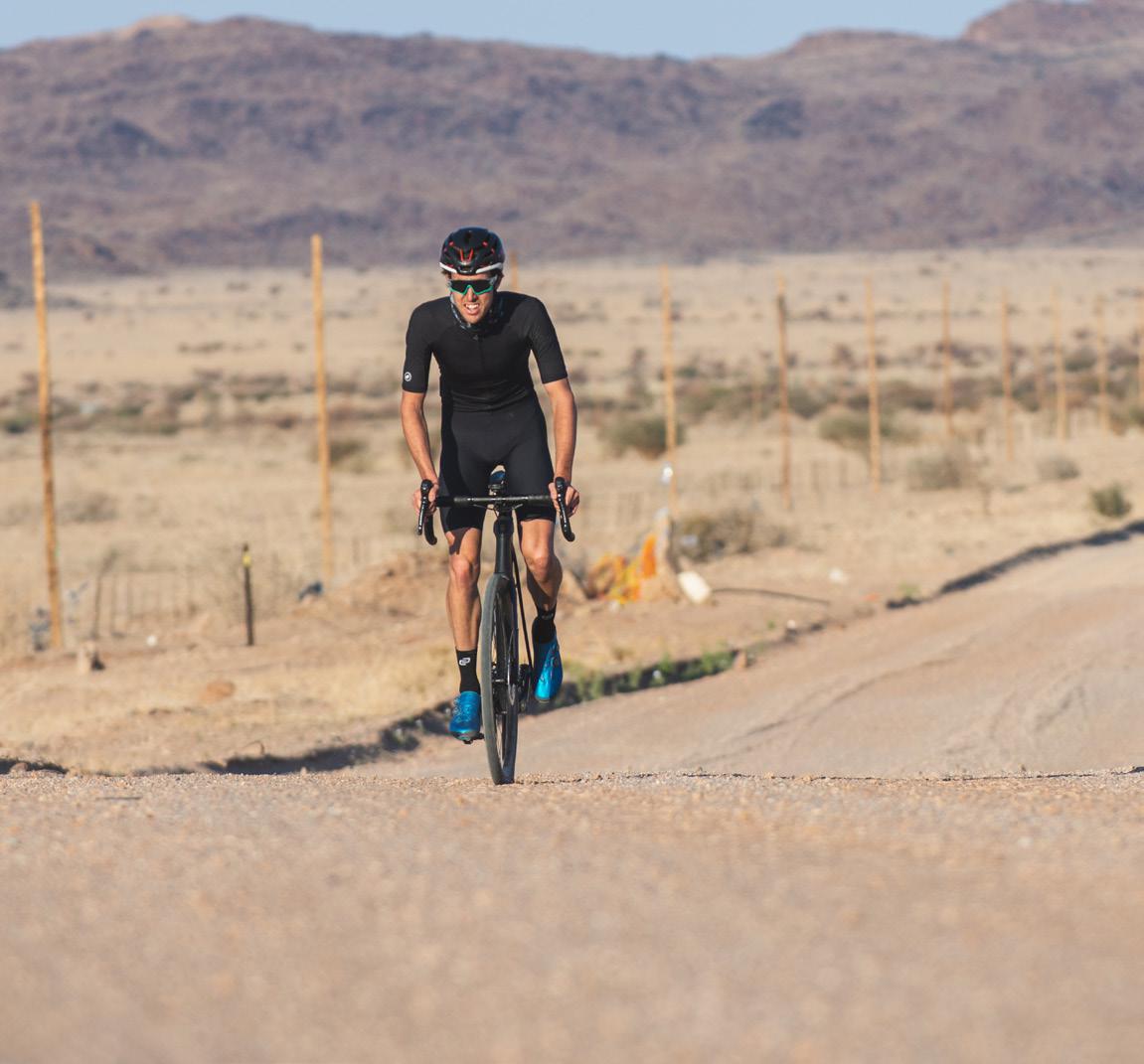 Luckily it was a downhill into town as the sun was setting on a tough, long and really challenging day, mentally. 223km and eight hours of riding later, I arrived at my end destination. I was a bit broken, but I suppose that is understandable. I was however super stoked that I completed the route in tough conditions and on a great bike perfect for the route.