DURING THE LAST WEEKEND OF AUGUST 2020 JAMIE MARAIS BECAME THE ONLY KNOWN PERSON TO CYCLE A VERTICAL ASCENT OF 9 000 METRE S, THE EQUIVALENT ELEVATION OF MOUNT EVEREST (8,845M), IN A BIG 5 GAME RE SERVE OVER 36 HOURS. HE MANAGED TO COMPLETE THE CHALLENGE AND THROUGH HIS EFFORTS SUPPORTED WILDLIFE PROTECTION AND FAMILIES AFFECTED BY COVID-19.

JAMIE, CONGRATS ON YOUR EVERESTING FEAT! WHY DID YOU DECIDE TO DO THE CHALLENGE AT KARIEGA GAME RESERVE?J
The ride was never actually intended to be an Everesting attempt, the vertical ascent achieved was purely incidental. Why Kariega? Well, during lockdown I was thinking back to the incredible time my family and I had at Kariega Game Reserve during December. I called up one of the senior rangers and asked how lockdown and the resulting downturn in tourism had been affecting them, and specifically how they were funding the antipoaching unit. They told me they were really struggling and had not had any income for months. I mentioned that I had an idea in mind and shared the concept of coming up and riding for 36 hours in at Kariega Big Five Game Reserve as a way of raising funds for the anti-poaching unit and to feed the families of those affected by Covid-19 at the reserve and surrounding communities. I then met with Lindy Sutherland who is the Director of the Kariega Foundation, and three weeks later my support crew and I were on our way up to do a reconnaissance trip to find the right climb for me to ride. No one has ever climbed a mountain for 36 hours in a big five game reserve before, and we figured that the outrageous idea of doing this would generate a lot of interest and support.

TELL US ABOUT EACH LAP? DISTANCE, WHAT WERE THE OBSTACLES?

The climb I rode was 4.5 kilometres up with 240 meters of climbing. My aim was actually to do 65 summits in 36 hours, but there were factors that slowed me down and hampered my progress. The biggest obstacle was the cold. There was a massive storm the previous day that hit the country and resulted in widespread snowfalls across the region. This resulted in freezing air blowing through the night, which was extremely taxing both physically and mentally. I was really suffering in the cold and didn’t have the right gear to deal with that extremity of temperature, as none of us, including the locals, were expecting it! Every descent was a gamble and I was just hoping and praying that I wouldn’t collide with an elephant, buffalo or any other animal running across the road.

DID YOU ENCOUNTER ANY WILDLIFE DURING YOUR CHALLENGE?

Yes – an enormous bull elephant nicknamed “Charlie”. He appeared in the middle of the road on my very first summit! It was nerve-wracking and played on my mind for the rest of the ride, especially whilst descending at speed during the night. During the reconnaissance trip, I had the incredible experience of riding right up to a rhino by the name of Thandi, while her calf was with her. I don’t think I’ve ever been that
scared. My heart was pounding. That rhino is huge and could easily have trampled me if she felt threatened. Thandi is famous for becoming the first rhino to survive after being poached, and the fact that she allowed me as a humanbeing so close to her (literally a couple of feet away as I rode past) was an experience that impacted me deeply. 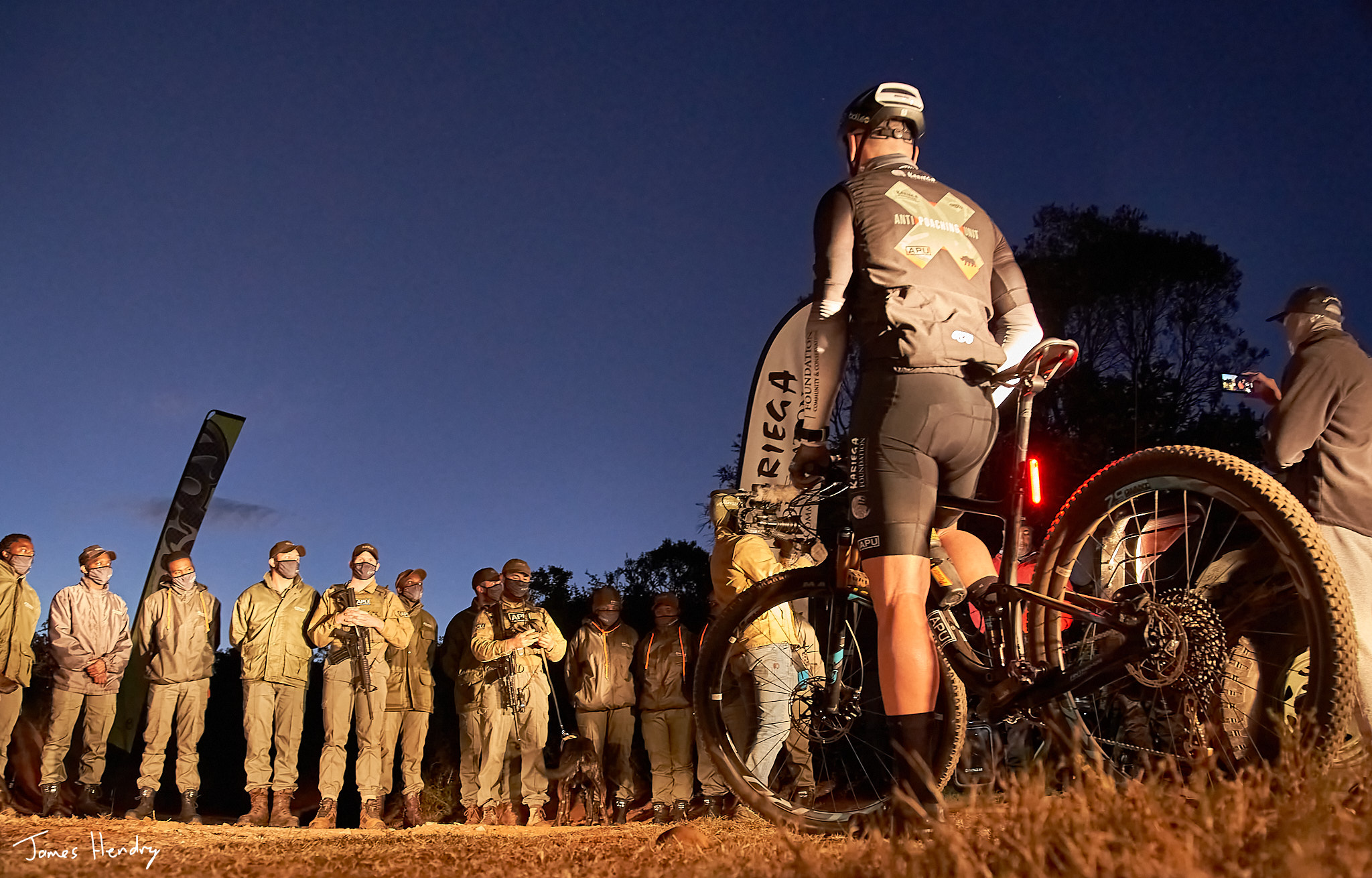 HOW DID YOU MANAGE TO KEEP FIT DURING LOCKDOWN?

We had just moved into a new development with only a few finished houses, so I was able to ride on the undeveloped side of the estate.

MOST MEMORABLE PART OF THE ENTIRE RIDE?

Having my two sons aged 15 and 10 do a summit with me on an e-bike, and knowing that my wife and daughter were waiting at the summit. My wife was a trooper – she was limping around with a broken toe for hours on end, welcoming me at the top of each summit with her radiant smile and making sure I was
attended to. My son Sam took off like a missile on the e-bike and smashed the entire climb on his own. That apple didn’t fall far from the tree. I asked him what he would have done if he ran into an elephant – his answer? “I would have pedalled really fast Dad!”

TELL US ABOUT THE BENEFICIARIES YOU SUPPORTED WITH THIS CHALLENGE?

All funds raised were donated to the Kariega Foundation and used to fund the anti-poaching unit and, through various soup kitchens the foundation supports, theyfed the families of those affected in the area. 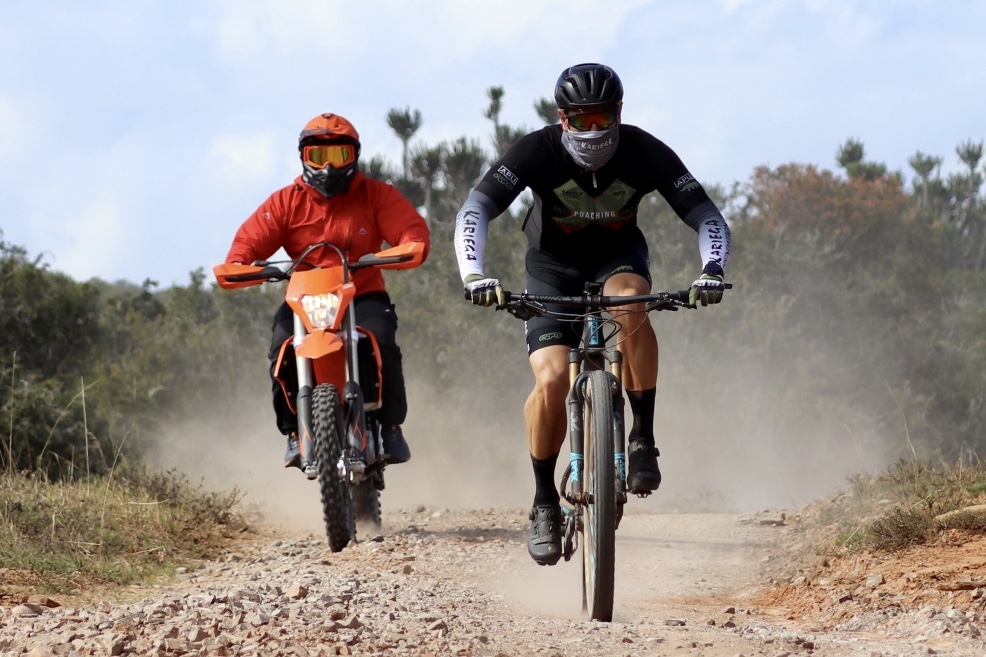 GEAR: WHAT BIKE DID YOU USE, ANY SPECIAL UPGRADES? NUTRITION ON THE BIKE?

I used my own personal bike – a Giant Anthem Advanced Pro 0 with SRAM XX1 Eagle. I have a 720mm Specialised flat racing bar but other than that, the bike is standard. I carried one water bottle with me and used Power Bar gels and bars towards the end of the ride.

ANY OTHER BIG CHALLENGES PLANNED FOR THE NEXT COUPLE OF MONTHS?

There is always something brewing in the think tank. The challenges are becoming more and more extreme in nature, but riding a mountain bike up a climb for 36 hours in a big five game reserve is going to be hard to beat in terms of extremity. I like climbing, I enjoy danger and am passionate about conservation. Let’s see what happens.

GLOBALLY, WHERE WOULD YOU LIKE TO DO AN ENDURANCE EVENT AND WHY?

I love Africa. There are so many wild and challenging places to test yourself. If I had to choose somewhere outside of Africa, it would be Australia. I lived there as a kid and would love to go and test myself in the Outback.