STEF GARLICKI has big plans for his 2018 downhill racing season. 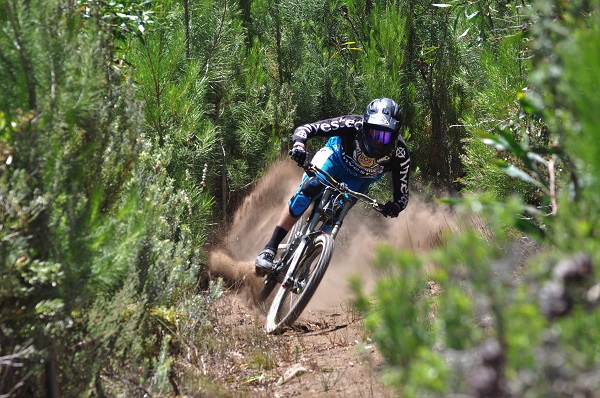 Time to dust off the cobwebs and kick off a new year! Life is about progression and riding is no different. It’s about finding ways to improve whether it’s your physical state, your bike, your diet or even your mental state. For me the off-season is where you find these gains and then during the year the focus is to maintain. This off-season has definitely been probably the most challenging for me mentally due to a few factors in my home life and changing title sponsors but it’s in these times that staying focused is the key. Just keep your head down, keep working as hard as you can and the rest will sort itself out. 2017 was by far my best season ever and naturally I assumed things would just fall into place but life does not always work out as planned. However things are coming together slowly and I am really stoked to start 2018 with a bang and build on my world cup season from last year. I think your mental state is by far the most important part of any sport. At the end of the day it doesn’t matter how much you train, if you are not in the right place mentally you won’t achieve your goals. BELIEF is the key in life no matter what you do. Sometimes though you find yourself in a hole and it seems almost impossible to climb out but as they say, these tough times have not come to stay, they have come to pass. I think you need to find that driving factor and it may differ for every person but for me it is my love for riding bikes. When I started racing there were no sponsors, no complications, just pure enjoyment of riding and sometimes just taking a step back can really clear your mind. Then the next step is just to refocus on the things you can control and get to work with a never say die attitude. I truly believe that greatness is something that exists inside of everyone, it’s up to you to bring it out. People that succeed in life are the ones that just don’t give up and keep on going no matter what!

My off-season program is typically a period of rest first then mid-November I get cracking with training and come mid-December I get back on the downhill bike but it’s crazy how you feel after not being on the downhill bike for two months. I think taking a break is key for your mental game but it always makes me a little unsure as you start to wonder if you will still be up to speed when you come back. Then when you actually start riding again you feel a little strange but it comes back in a couple of weeks and the motivation level is waaay up there. It’s strange but sometimes I ride my best after a long break off the dh bike. I will say that I spend more time on the enduro bike while off the dh bike but as the season approaches I tend to stay off the endure bike and rather ride on the road as to not get mixed up between the two bikes. It’s weird but the feel of the way the two bikes ride can be a bit off-putting as the setup is so different, so I would rather just stay comfy on the race bike in season 😉 Right now, I have been upping the dh riding and will be spending two to four days on the dh bike per week which leads to rapid progression I find. I will say that I have a theory I would like to test out where one week a month I stay off the dh bike completely, purely as a motivator to go into the next week fresh and ready to go! We start racing towards the end of January with a provincial and then the first national round so let’s see how we go. Excited! Until next time.

STEFAN GARLICKI is a 2x SA downhill mountain biking national champion and pro world cup racer. He is a brand ambassador and speaker. He will be sharing his global travel and racing experiences with Full Sus readers. Follow him on Instagram, Facebook and Twitter: @stefangarlicki