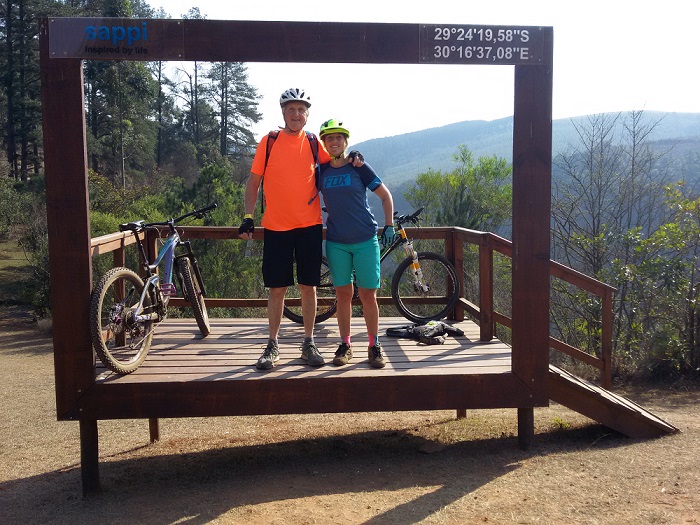 After a tough couple of months for our regular columnist KATH FOURIE, she managed to cheer herself and her father up by doing a daughter and dad ride.

Recently, I’ve been feeling a little jaded with things. The world’s a pretty tough place, and sometimes I feel like I need a breather from realities that I don’t want to deal with anymore. Like the fact that I get sewage back-ups from the municipal sewer into my garden every six months. Have you ever had to keep your dogs out a river of loo paper under your kitchen window? No? Wow, you are seriously missing out. You know, the one thing that possibly saved my mind from melting when I got home and found the latest grey water fountain in my garden, was that I had just come from a ride. And it wasn’t just any ride, it was the first singletrack ride I have ever taken my dad on. And the first one since my mom passed away in July. The world, as I mentioned, is a kak-tough place, and my dad has had to bare the brunt of it over the last four years, losing a 33-year-old son to cancer, and then nursing his wife to the end of her life two years after that – battling the same disease. So being able to take my dad out on a ride, even if it was at 10% of the speed I normally ride, was the first time I felt I had any power to make a change in his life, to bring something new that wasn’t trauma. To get him outside, away from a house with painful memories and emptiness, and into the bright sunlight of a spring morning in the Karkloof. We left the parking lot with him clunking through his gear set, trying to remember which levers to push, laughing as he rode off the singletrack into the bushes. He was soon settled and commenting on what he was seeing, getting his heart rate up, learning how to roll over small rocks and logs. We laughed at how absurdly bright we looked, him in a day-glow orange shirt and me in the brightest yellow helmet I could possibly have chosen. He was smiling and concentrating on where he was right then and there, taking it all in. We stopped for a picture, and we continued up some singletrack that challenged him. I was proud of him for trying! When riding along the edge of the dry Karkloof riverbed he was blown away by the humungous rocks, and we stopped, laying our bikes down in some bushes and went off to explore. My dad is a canoeist and we found a deep hole which would be dangerous to get stuck in during the wet season. My dad finished our exploration off by saying: “Now if I was going to murder someone, that is the hole I would bury them in.” Charming, my dad. Always practical though. We got back to the parking lot, and we shared water he’d carefully chilled and added rehydrate to. He was flushed, smiling and happier than I’d seen him in a while. Later he called me to say how much he genuinely loved the outing, and that while the singletrack scares him a bit he can’t wait to go again. And as I stared at the river of poo that afternoon, realising how much work was going to be involved in cleaning up this mess again, it didn’t matter. At least I’d managed to create a
memory and an experience that day, something no-one
but myself can put a value on. It was nothing you could
buy, nothing you could sell, it was only something my Dad and I could have together. And that is unique,
that is creation and that makes the world a little less tough and somehow the terrible times are a bit easier to swallow.

Kath Fourie is a creative project manager, a double UCI Masters World Champs medal winner and a regular contributor to Full Sus. She can be found on the trails of Howick and Karkloof with her little pack of trail dogs, and her partner Mark Miller, and she’s happy to show you around the single track.