5 days, 4 islands, ferry trips between the islands, free coffee and beer, incredible trails, and more views than you could ever remember. Now that’s what a mountain bike stage race should be made of! 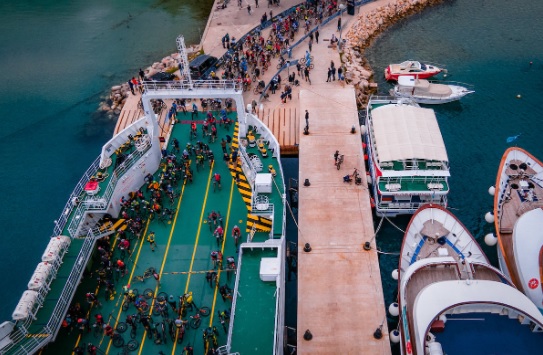 That’s exactly what 4Islands MTB Croatia is. That and so much more.
4Islands MTB Croatia is described as a “Unique race in the world of mountain bike”. I can confirm that this is nothing short of the truth. Over five days, we, and 232 other teams, raced 272 kilometres of the most incredible trails across four different Croatian islands, and we arrived at stages 2 and 3 by ferry. Talk about rolling up in style.

4Islands MTB Croatia is the Epic Series’ latest purchase and the 2022 edition was the seventh running of this globally renowned event; with the Epic Series having taken over ownership, the already impressive reputation was escalated to an even greater level and it left only the responsibility of racing (and not missing the connecting ferries) with us riders, the rest was taken care of – exactly what you want when racing in a foreign country.

The event consisted of five days with a short and punchy Prologue opening the event. In total it was 272 kilometres with 5 890 metres of climbing. Not long, but not short. But it wasn’t the distance that had me slightly intimidated prior to the race. And it wasn’t the climbing either. It was the warning of the route being rocky.

Now, I had heard that Croatia was rocky, but I hadn’t really banked on it being the equivalent of an Adriatic quarry! Nothing some 2.35 tyres and CSixx FOAMOS can’t solve, though.

The first island of the race is Krk and the race village is based in Baška, a holiday town located on the south east of the island. The town is known for its old stone houses, narrow streets, surrounding woodlands, and the 1800-metre-long pebble beach that’s called the “Great Beach” and a promenade that’s littered with beckoning coffee shops and restaurants. It was the picture-perfect setting for the opening days of 4Islands. 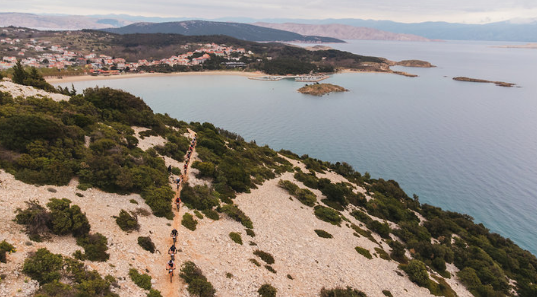 The Prologue lived up to its name. It was short, at only 13 kilometres. It was salty in that it kept us near the coast for a large portion of the route and that it drove heart rates into the red and the perspiration poured.

The opening challenge of the Prologue was an innocuous one, but it proved more of a challenge than I had anticipated. The pebbled “Great Beach” stretch, some 200m from the start chute, grabbed at wheels, sent us drifting, drove heart rates up, and had us laughing at how amateurish we felt as we dabbed feet, spun out of control, and couldn’t quite find the correct cadence. Once the beach had been “successfully” navigated, we climbed through a quarry-like section towards a coastal cliff that presented uninterrupted views over the bay and the coastal town. 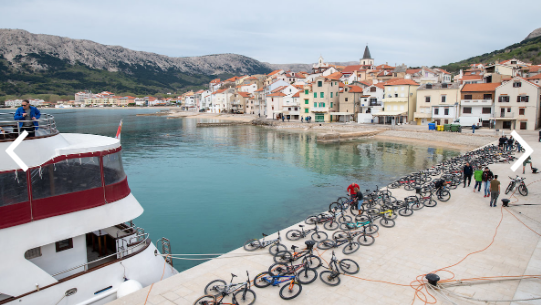 The route then directed us through one of the coastal forests back towards the town and into its outer limits where we raced through sheep pastures, up narrow streets, between old houses and waving residents. And then we climbed. I had initially thought that 300 metres was going to be a walk in the park, but when the climb of the day tops out at around 20% and you’ve been giving it beans since the gun, it’s going to burn. Fortunately, most of the climb was on tar, but then it turned into a rocky limit-tester that eventually forced us off the bike (like the majority of the field, barring the pros).

I’m not ashamed to say I walked it. The minute of pushing the bike gave me a chance to pull myself towards myself before we bombed down a steep singletrack between ancient stony walls back to the valley floor and opened the taps for the fast and furious final kilometres back to the start/finish on Baška’s promenade.

Upon finishing the stage, we handed our bikes over to the bike wash team who washed, racked and stacked them, then grabbed a delicious post-stage meal and a free coffee or beer, then settled in to watch the rest of the teams roll across the finish line. Not a terrible way to spend an afternoon in Croatia. 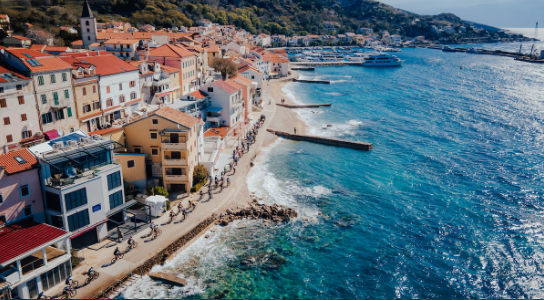 Stage 1 had been tipped as the second most challenging stage of the race and it was clear to see why. I should have, by now, been able to read between the lines when looking at the stage name… rocks.

The stage began with a neutral start along Baška’s promenade where we were cheered on by locals enjoying their morning coffee. And then the neutral zone ended and the racing, and climbing, began in earnest.

The first climb of the day was roughly eight kilometres long. It began on tar on sheer gradients as we exited the port, then eased off when we entered the pine tree-lined singletrack. The forested climb was one of the highlights of the day as all I could hear were the cheers of a few fans, the shifting of gears, and the crunching of tyres on trail.

Upon exiting the forest, as if by magic, we were transported into an otherworldly section known as the moon plateau. A more immediate change in environment I have never experienced. The section was littered with sharp rocks as far as the eye could see. Fortunately the section wasn’t too long and we managed to keep all the sealant in our tyres before charging onwards and upwards towards the day’s first water point where we stocked up on snacks. Once the energy levels were sufficiently topped up, the longest section of singletrack of the entire race arrived. And it was just as rocky as the organisers had promised (no surprises there). The trail started off as slow and tricky, with line choice being wildly important but once we had the read, the brakes were required less as the flow was found. Down the national downhill trail we went, white-knuckled and grinning like kids on Christmas day. It was awesome.

The remainder of the stage was punctuated by rolling climbs and more rocky singletrack before re-entering Baška and crossing the finish line, ready for food and a beer (or two); recovery is a serious game, you know.

Up until this point of the race, we had only heard about the famed ferries of 4Islands so the morning of Stage 2 was out first introduction to them. And they were impressive to say the least. We left Krk’s port and set sail for the island of Rab, for Stage 2. 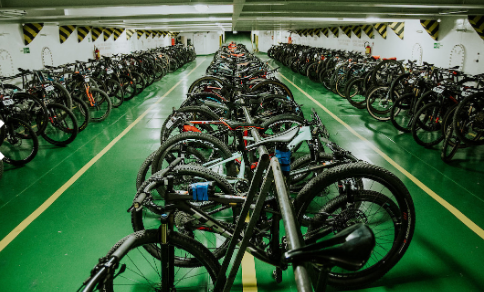 Stage 2 was earmarked as the fastest stage of the event and kindest to those who preferred open roads to technical trails. It was fast and it wasn’t nearly as challenging as Stage 1, but it was no less beautiful or memorable.

The standout feature of the stage was, without doubt, the climb up the Premužić trail – a 100-year-old masterpiece of dry stone architecture that had always been ridden as a descent in previous editions of 4Islands; we were amongst the first to experience this as a climb and the views over the Adriatic Sea and the surrounding mountain ranges were nothing short of spectacular.

The middle section of the stage showcased the urban side of Rab as we raced through small towns and their harbours and dreamed of what it would life would be like here… dreams that were short lived as punchy climbs brought us back to reality and demanded some efforts to summit.

The final third of the stage was fast, and I mean really fast. We drove the pace along the macadam roads and into the City of Rab where, for the first time in the event’s history, the stage ended. We navigated ancient, narrow city streets, skidded, and bumped over cobbled stones, and sprinted across the line, Rab’s port on one side and the city towering over us on the other.

In the finish area, music was pumping, sponsor activations had been set up, the smells of local cuisine wafted through the air. The vibe of the finish area was incredible as teams from around the world shared their impressions of the day while lounged in deck chairs soaking in the view. But in the distance, rain clouds amassed.

And then the rain began to fall. And it did not stop.