One particularly standout feature of almost every cyclist is how few ride with their spouses. I know of one or two couples who do, but they are certainly in the minority and it seems both need to be extremely accomplished riders. 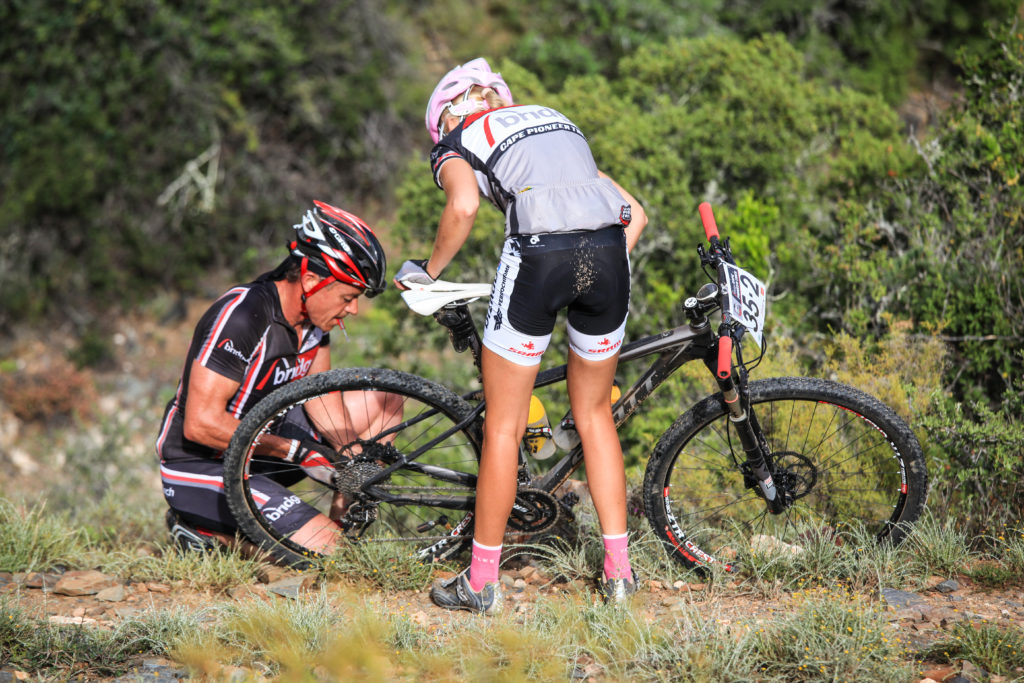 FOR THE MOST OF US, SPOUSAL RIDING REMAINS AN ENIGMA. BUT WHY?

There are the obvious logistical challenges that are brought about by having (especially younger) children,
but logistics aside what other barriers would there be? Our cycling group has a diverse ability level, from Epic riders on fancy carbon machines to complete novices on alloy hardtails – some even on E-bikes. But we all enjoy the Sunday morning coffee rides immensely.

My spouse is a trail runner, and relatively fit. A migration to mountain biking seemed a logical step and
I took the plunge. Second-hand frame, cheap components and a fairly competent MTB was built and proudly presented. Some colour-coded lycra, a helmet and cleated shoes later and we were good to go.

AND THAT IS WHERE THE CHALLENGE BEGAN.

A lot of what I take for granted proved not to be common sense, or particularly obvious.

Twisting your foot to release the pedal from the cleat rather than trying to lift it off the pedal; gently testing the brakes to see which is front and which is rear, and once determining which is which, not slamming on the front brake with 100% force; getting your weight over the back wheel when descending …

THE CONSEQUENCES OF MY NAIVETY WERE SUB-OPTIMAL.

Clearly I had failed. I should not have taken anything for granted and needed to share everything that I know about riding an MTB rather than just letting it happen.

So I tried this. But once again failed miserably. The longest bit of listening time I managed to get was about
20 seconds, after which the eyes would roll and I’d get the general “I know, I know” rebuff, or sometimes even the “so when did you become a pro cyclist?” chirp. We needed professional help. So the help of a skills coach was solicited. With the trail running, fitness was not anywhere near as large an issue as staying upright.

AND WHAT A DIFFERENCE THAT MADE!

MTB to being completely “wrong”. I did not have the exaggerated opposite knee sticking out when going around a bend. My bike setup “looked” clearly badly done, the saddle was obviously too low, the cranks quite clearly the wrong length, my back angle was not correct etc. etc.

These lessons had created a monster. But, a monster who was at least able to remain on the MTB and come and ride a few trails with me. Which was kind of the point of the whole exercise! We had a number of rides
together, but due to time constraints I found myself riding in the week mostly with my usual crew, whilst my spouse would do the same but at different times. Weekends we would occasionally ride together, but again more often than not we would default to our regular riding groups.

AFTER ABOUT NINE MONTHS OF RIDING, I SUGGESTED THAT WE ENTER A STAGE RACE TOGETHER. “IT WOULD BE FUN,” I SAID …

There were a few ground rules which needed to be put in place. Having had a few rides together already, and both being lawyers, we realized that some ground rules were necessary – this took the form of a verbal agreement:

That seemed pretty easy. We entered the race, got matchy-matchy kit, arranged babysitters for the weekend and booked a night in a boutique hotel. A weekend away without the kids spending Saturday and Sunday on our MTB’s. On paper, perfection.

The morning of the event started well. We made it to the start on time and gently got the ride going without too much anxiety. What could go wrong? And then we reached the first climb of the day. It was probably a respectable 5 km into the ride to allow for a proper warm-up and was really no more than about an 8% gradient. Nothing particularly challenging. Except that being so soon in the ride, the majority of the field attacked it at pace, zooming past us.

This created some consternation, and the extremely well-hidden “fear of coming last” made its first appearance. It is actually quite remarkable how many times before we started I was told to: take in the view;
enjoy the scenery; relax at all the water points … And then this happens.

Being well briefed, I refrained from relying on any of the stock mantras which were banned prior to us starting the ride. But I began to doubt this strategy as my spouse hit heart rate zone 6, 5 km into a rather hilly ride.

At this stage I was riding at the back. Keeping out of harm’s way. But have you ever tried riding at about 40% pace up a hill and not looking like you’re either riding at 40% or taking the p*ss? It is harder than it looks.

Which is when that straw that risked breaking the camel’s back presented itself. Near the crest of the hill,
another rider pulls up alongside us, looks at me – laughs and loudly proclaims to his spouse “look lovey, another spouse still in zone one like me – he’s hardly even pedalling!”

It was probably good that that happened so soon into the ride. It broke the ice and allowed my riding partner to see that it is not embarrassing to ride with your spouse and that it is not unusual for a rider doing 150 km a week to be stronger than a rider doing 80 km a month. That slowing down and genuinely just enjoying the ride and not going as fast as possible was actually fun.

Almost instantaneously I saw the jaw relax, the shoulders lift and maybe, just maybe a hint of a smile appear.

We stopped at all the water points and made friends along the way with likeminded riders who were actually able to speak in full sentences (with punctuation) whilst riding. One of the water points even supplied us with G&T’s and boerewors rolls! Certainly a first for me.

The ride ended way too soon. 30 km, 2.5hrs of fabulous riding on great trails, nothing technical enough to cause any angst, it was perfect. No testy teenage children wanting more airtime from Mom and Dad. No cell phone pings. Just us having a jol, clearing the mind and enjoying the experience. Of course the obligatory lazy lunch, afternoon rest, sundowners, dinner and nightcap at our hotel just topped off a truly
amazing experience.

Day Two was a carbon copy of Day One, except that this time we started right at the back of the field with
our friends from Day One. We were now comfortable riding at our own pace, which was not maximum effort from either of us. The way it should be.

Spousal riding is by no means something to be undertaken by the feint of heart, but once you break through the perception barriers, all the soppy clichés apply. Give it a go, you won’t regret it!