SJ KOTZE is determined to see us get back on the bike after a crash. See his comical way of dealing with an embarrassing fall.

There are a few things that you can be sure of in life. Death and taxes are the two certainties we always joke about, and if you are a mountain biker, crashing is another of life’s guarantees. Some crashes are small, some are big, some result in injury, or expensive bike damage, or embarrassment in front of your riding crew. They often come in waves and you’ll find yourself eating dirt multiple times within only a few rides. The worst crashes result in injuries that keep you off the bike, and the best crashes are those fast ones that you escape acrobatically with everything intact. But almost all crashes will put a big fat dent into your confidence. You can fix a bicycle, and most injuries will eventually heal, but getting your confidence back is usually a more difficult affair.

Some people may try to use some fancy-pants sports psychology, or getting “back on the horse”, or “putting the incident behind you”. But as the saying goes, it is much easier said than done. So, in my experience as both a rider (who has binned it a lot) and as a confidant to my customers after they have had an accident, I have developed a much more effective and a much faster way of getting your mojo back after a bail or two …

BLAME SOMETHING, OTHER THAN YOURSELF, FOR THE CRASH – Yes, it is as easy as that. These are my four favourite things to lay the blame on:

This is both the easiest to do and my favourite option to use. There are so many possibilities on a bike to
blame. My suspension was too hard, or my rebound was too fast. My brakes were not powerful enough or they started to fade. My tyres were too soft or too worn, or they’re a crap brand with a rubbish tread
pattern or compound. My pedals unclipped from my shoes and caused me to take a soil sample. Getting your confidence back after blaming something on your bike is as easy as opening your wallet, because all you have to do is throw some money at the cause of the crash. I personally love to blame one of the tyres. I buy a new tyre to replace the one I have blamed, and just-like-that I have absolved all personal responsibility for the crash for the measly cost of a tyre. Instantly my confidence is back and I can hit the trails again, just as hard as before, with my new tyre and same amount (lack of) skill. 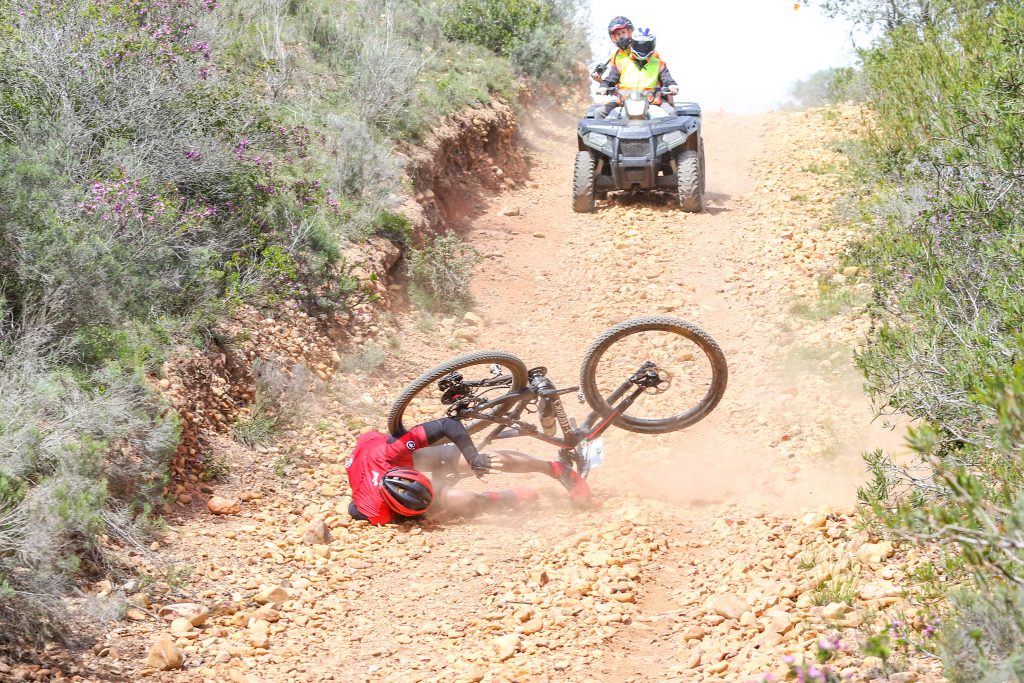 BLAME THE WEATHER AND THE CONDITIONS:

Sometimes the weather is genuinely not on your side. The conditions could have been really slippery (wet or loose) causing you to hit the deck. Or it could’ve been so cold that your fingers were too numb to pull the brakes properly. Or it was so hot that just keeping up your concentration and hydration levels was a challenge. Or it was so windy that a big gust blew me off the trail. Or it was so wet out there that nothing on the bike actually worked as it should. Blaming the weather is always a safe bet; who can argue with the unpredictable ferocity and absolute power of mother nature.

BLAME THE TRAIL AND THE TRAIL-BUILDER:

Almost all the trails we ride have evolved and improved over time, but sometimes the trail-builder gets it wrong. That corner was too tight, or the berm was too soft, or the jump was too steep, or the landing was too short, or the track was poorly marked. There are lots of potential pitfalls on the trail ready to catch us out and choosing to blame the trail-builder is often the smart choice. But sometimes the poor trail-builder
had nothing to do with the cause. Maybe the line was eroded or blown-out (overridden) or a tree had fallen
on the path, causing you to take a dirt nap. Whatever the cause, blaming the trail or the trail-builder is a great confidence booster, but just be aware that if you go back to that same trail, there will be some bad voodoo waiting to catch you out again.

BLAME THE OTHER RIDER:

If there was another party who had an active role in you stacking it, as a general rule, always blame the other rider involved. Sometimes that other rider is your riding mate and sometimes it is some random perpetrator who did something stupid to cause you to closely inspect a piece of trail-side property. Either way, assigning the blame to them allows for quick absolution from your crash. Nothing will get your confidence back faster than making it somebody else’s fault.

So, there you have it, no matter how or why you face planted, there is always something plausible, something tangible and something explicable that you can lay the blame on. So, when you have the need to bounce back from a crash, blaming yourself should never be an option!